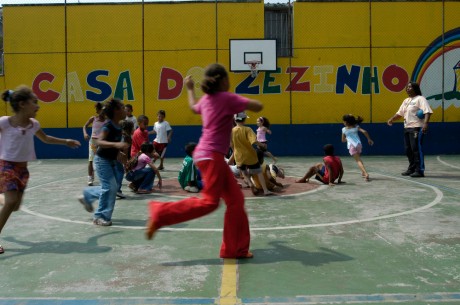 Through our Relay programme, we connect journalists and researchers by helping academics make their work more widely known through the media and encourage journalists to see research as an important resource for their reporting. We produce free-to-use radio and print features based on research findings, in-depth topic guides for journalists, and run workshops to enhance researchers’ understanding of how the media work.

Academic research makes a crucial contribution to development but too often findings are kept within the research community. The media can play a part in communicating this knowledge to a wider audience.

Policies and practices are more likely to benefit society when they are informed by research knowledge. By clearly communicating research to a wide audience – whether this is development practitioners, policymakers, civil society representatives or the general public – it can inform public debate and scrutiny. Ultimately this leads to more relevant and sustainable development efforts.

The mainstream media can play an important role in communicating research to a range of audiences in ways that make it easy for people to understand how the research relates to them, their community and society at large.

However, we know that effective communication of research through the media is not straightforward. It depends on factors such as the capacity of the media and their professionalism as well as environments that allow open, vibrant and critical public debate.

It relies on the willingness of research institutions to recognise the value of communicating research to non-academic audiences, and to engage with the media and other communicators. Research funders are in a position to encourage and support institutions to do this.

One of the world’s largest funders of science research has given its support to a growing campaign for publicly-funded research papers to be shared openly online.

We’re proud to be able to show you a documentary video made by Panos Relay journalist fellow Sandeep Patil, as well as other work from the concluding project.

“I shared insights, from the experience of the Relay programme, about working with researchers and the media to build relationships and communication skills to reach the wider public through media coverage.”

Tax and governance issues hit primetime airways in Uganda as a result of a workshop bringing journalists and researchers together.

This case study shares recommendations and details the lessons learned during a communications project to improve media reporting on tuberculosis (TB) in Zambia.

Tania Ghosh from the Relay programme introduces the first in a series of blogs on communicating research findings.

The topic guide considers areas of potential conflict between countries, concerns over policy guidelines regarding dam building and the socio-economic impact of displacement.

Mega-dams have caused controversy around the world. The Lower Subansiri Hydroelectric project, being constructed in Arunachal Pradesh, North-east India is no exception.

Panos London's Relay Programme Manager, Annie Hoban, talks about a new case study that shows how researchers and journalists worked together to talk tax and governance in Kenya.

Feeling the pinch: impacts of the financial crisis on developing countries

Overview According to recent studies it is the world’s poorest who will be hit hardest by the global recession. There have been many reports on how developed countries have been affected by the current financial crisis, but new research, which has come out in the past few months, has shown how the global downturn is…

From soldier to civilian: the challenge of reintegration

Overview Armed conflict is an all too familiar theme for journalists in many parts of Africa and Asia. But what happens when the fighting stops? Do people just put down their guns and go home? Do they even have homes to go to? And how will they make a living and support their families? The…

Researchers have criticised the attitude of health service providers in Ecuador, saying their judgmental approach is compromising adolescent girls' rights to sexual healthcare.

Legacy of Make Poverty History was to ‘Africanize’ poverty

The 2005 Make Poverty History (MPH) campaign turned Africa’s poverty into the media focus and public face of the campaign, a new report claims. It argues this focus on Africa damaged the campaign diluting it’s overriding message of social justice.

A new study predicts the effects of climate change will reduce Ethiopia's economic growth and widen the gap between the country's poorest and richest people by 20 per cent.

Communication leads to more equal roles in the home

An education programme focussing on communication skills is helping rural women in Honduras negotiate equal roles in the home, says a researcher.

Early diabetic deaths due to high cost of treatment

Children with Type 1 diabetes in Sub-Saharan Africa die one year after developing the disease, as healthcare costs drastically outstrip earnings.

More than 500 million people rely on fishing to make a living yet there is little information about how their livelihoods are affected by climate change, according to researchers in Malaysia. A new report by the World Fish Center in Penang, Malaysia, now aims to fill this research gap.

Macho culture in South American prisons is helping to fuel the spread of tuberculosis (TB) among male inmates, according to researchers. A new study suggests that male inmates are reluctant to tell their cellmates they are ill and fail to seek medical attention in case they appear weak.

The motivations behind African peacekeeping contributions

States that are poorer, have lower "state legitimacy" or lower levels of political repression, are likely to contribute higher number of troops to regional peacekeeping operations suggests a new report.

A new report has found that the Kenyan government has not clearly defined the rights of refugees in Nairobi, meaning neither the police nor refugees know where they stand within the law.

A new report claims that women's groups in Nepal have helped to cut deaths among mothers and newborn babies by up to 30 per cent. The study suggests this was achieved by developing women's confidence and encouraging them to share their experiences of childbirth.

School truancy could act as an early warning sign helping authorities to identify children at risk of becoming homeless, according to a report on street children in South Africa.

A new report claims that Nestlé's aid to developing countries is determined by commercial investments rather than poverty levels.

According to researchers an agricultural information service in Lesotho is failing to reach the majority of farmers in the country. The study, from the university of Botswana, says that many poorly educated farmers do not see information as relevant to them.