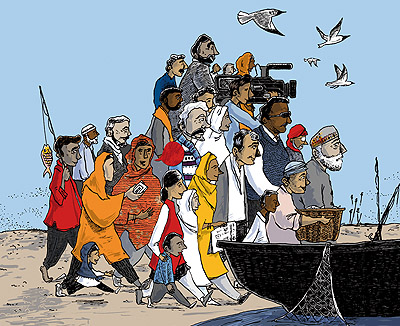 This case study examines the long battle by fishing and farming communities living on the shores of Pakistan’s Manchar Lake against the pollution destroying their livelihoods and health. It explains how the community was able to draw national media attention to their predicament with the help of Panos and its partners.

The Manchar Lake project is an example of an integrated approach to communication for development. A combination of first person testimonies, relationship-building, inclusive dialogue and mainstream media coverage helped those most affected by the pollution to contribute to debate and decision making at national-level.

The story of Manchar Lake suggests there is no single – or quick – route to achieving dialogue between those with power and those who lack it, and ultimately effecting change. However, by examining the successes and challenges of the communication approaches used in this case, this case studies offers suggestions which can be applied in other situations.

Be sure to check out the centre-page illustration which provides an overview of this integrated approach to communication for development, and see the end note outlining plans for a pollution-free lake.

Panos London and Panos South Asia’s Pakistan office, local and national civil society organisations, the community of Manchar, and local and national media worked together on a range of communication activities and outputs culminating in a People’s Assembly in 2007. The media coverage generated by these activities, in turn, drew provincial and national government officials into dialogue with people living near the lake, resulting in a number of positive outcomes.

This case study explores how communication activities helped a marginalised community in Pakistan to speak out against the pollution ruining their lives.

All together now case study

“What women need is economic independence”